How We Fight Back

We are living through a dark time. Amidst all we are facing, the Supreme Court’s decision in Dobbs strikes so deeply.  It cuts into our family’s health, safety, and opportunities. It is the blunt use of power to harm.

It’s okay to take some time to grieve in these dark moments. It’s okay to scream at the injustice of how we got here.  It’s okay to be terrified of what is to come.  But let’s not be paralyzed with fear.  Let’s not descend into hopelessness.

It’s time to fight back.

Here are three areas of action we can focus on:

We need to make sure everyone knows that abortion is still legal in North Carolina, and we need to keep it that way. And that means work.

I have already been preparing for this moment, spending time over the last few months with leaders of Planned Parenthood and Pro Choice NC to strategize our best path forward in the General Assembly.

In the 2022 elections, we must ensure that Democrats in the legislature continue to have the power to sustain Governor Cooper’s vetoes.

We have already heard GOP legislative leaders say that they will take up measures to restrict access to abortion next session.  We know Governor Cooper will veto every single bill that comes his way.  At the very least we have to make sure that this November we elect enough members in the House and the Senate to have the Governor’s back and ensure the GOP does not get a supermajority. They have been blunt — and they will turn back the clock on our state and abortion rights if given the opportunity.

And, at best, we can work toward a future election that puts Democrats into majorities in both chambers. If that happens, we will codify our right to abortion!

Second: We need to help people living in other states.

It’s not just important that we keep abortion legal in North Carolina for our own sakes, but we have to help our neighbors.  Unfortunately, many nearby States have “trigger” laws which will immediately make abortion illegal.

I will work with my colleagues and abortion providers to ensure that North Carolina stays strong as a refuge for women from those States who need our help.

I have heard from the leaders at Planned Parenthood about the work they’re doing to prepare for this. They need our help. If you’ve got the capacity, I’d encourage you to provide them with support as a donor or volunteer.

Yesterday was a devastating blow for abortion access. Devasting. But one thing lawyers were also looking to see was what the ruling forecast for other constitutionally protected rights: like contraception and gay marriage.  Many of you may have seen a quote going around from Justice Thomas’s concurrence stating that he believes those opinions should be revisited too.  That’s a frightening thought.

There is not a majority on the current court to overturn other long-standing constitutional rights.  And we need to keep it that way.

So for now, let’s not despair. Let’s fight back. Let’s build power. 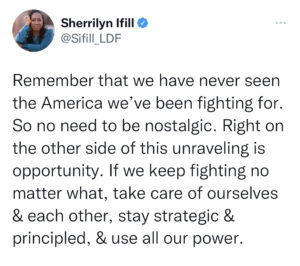 Over the last 50 years, the right failed to win the messaging war on abortion. Abortion access has more popular support now than it ever has. But they did win the power battle to enforce their minority opinion.

We have the majority. A majority that supports abortion access for those who need it. That believes in easy access to both contraception and fertility treatments. That celebrates when every type of family— including gay families and non-married families— adds children to our communities.

What our majority needs is power. The power to ensure safety for those we love. The power to enact true freedoms. Building power takes work, and I take seriously my role in the General Assembly and throughout the rest of this campaign to be a leader for a new kind of movement that acts boldly to protect our constitutional rights and freedom.

Let’s get to work.