What Is and What Should Have Been: Backroom Budgets for Special Interests, not Citizens

This week I voted against the Republican budget, and I’d like to explain why. Simply put, it is a budget that prioritizes corporations over people, shortchanging working North Carolinians and their families.

This budget shortchanges students and schools: We all know that providing a quality education is the cornerstone of the American dream. The Republican budget turns its back on this dream. The budget continues to leave veteran teachers and public education behind in order to protect tax breaks for corporations and people making over $200,000 a year. Democrats would have used those revenues to give every teacher a raise, with the average raise being 8%. We also would have provided $130 million for school safety measures, including $30 million in funding for additional school mental health personnel.

The Republican budget also takes $50 million in federal grant money for early childhood education and uses it to replace existing state funding for early childhood education. This grant funding should have been a boost, but the Republicans used it as a bandaid for a hole in their budget. If used as intended, the funding would have provided important early learning opportunities to at least 1,000 more children and families per year, the kinds of opportunities that have been shown to help our children throughout their entire educational careers.

The budget shortchanges State employees: The budget offers a modest 2% raise to most state employees, which doesn’t even keep up with the cost of living. Unfortunately, that raise excludes many employees of school districts and the UNC system. We should have given all of them a raise. One silver lining that I wish I could have voted for is that this budget ensures that all state employees receive a living wage of $15 per hour or more. We should have also raised the minimum wage for all hard-working North Carolinians.

The budget shortchanges healthcare, infrastructure, and the environment: We should have expanded Medicaid to provide healthcare to 670,000 North Carolinians, as Virginia just did in a bipartisan vote. We should have provided much-needed funding for our mental health and substance abuse systems.

We should have introduced an infrastructure bond to pay for upgrading school buildings, repairing and upgrading our deteriorating roads and bridges, and providing rural broadband to help education and economic development. We should have reinstated funds for the Department of Environmental Quality to clean up the chemicals in Jordan Lake and the Cape Fear River.

There is so much more we should have done. And it all could have been done while reducing the tax burden on middle-class taxpayers. Governor Cooper’s budget would have addressed all of the above, while giving every North Carolinian a tax cut on the first $200,000 of their annual income.

The budget shortchanges all of us: Believe it or not, I think that some of the things I’ve written about above could have been accomplished in a bi-partisan manner. But the Republican leadership was afraid to allow an open, deliberative, and democratic process. For the first time in history, Republicans passed the budget using a parliamentary procedure that completely shut out Democrats by disallowing any amendments to the bill.

I deeply believe in the principle that our government should be “of, by and for the people.” This budget fails on all three accounts. With one party completely excluded from the process, millions of North Carolinians were unrepresented. Instead, in private closed-door meetings, a handful of Republicans got to decide what would play well to their special interest and political machines. And that means this budget isn’t for the people either.

People have a right to expect more from their legislature, both in process and in policy. 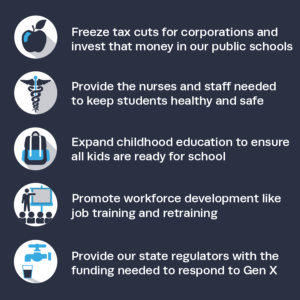