A Throwback that Brings People Together 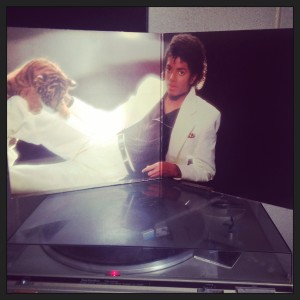 I have an old Technics turntable in my office at the General Assembly. Along the wall by the door is a collection of about 50 records.

Originally, I brought them to my office for my own pleasure. Music is very calming for me. I wanted to be able to spin a tune at the end of a long day, sometimes to celebrate but more often to help relieve frustrations before getting in my car for the hour-long drive home.

My record collection soon became a fascination for visitors. I’m pretty sure there is no other legislator with a turntable in their office.

Younger visitors are wide-eyed upon seeing the relic of a record player. One intern asked me “How does it skip tracks?” “It doesn’t,” I replied. “But it does skip sometimes.”

When a visitor picks out a record to listen to while we talk, it builds an immediate bond between us. It doesn’t matter what they pick, we’re both going to be happy with it. It’s their pick, and it’s my collection. The most popular choices are The Beatles’ Sergeant Peppers’ Lonely Hearts Club Band, Johnny Cash’s Live at Folsom Prison, and Michael Jackson’s Thriller.

One day I was visited by three veterans from the Wounded Warriors Project. They were clearly nervous upon entering the office, and to be honest I was a little nervous myself as I prepared to hear about their sacrifice and suffering. I asked them to pick out a record, and one of the soldiers immediately pulled out a Beastie Boys 12-inch. He told me that during his two tours in Iraq he listened to the Beastie Boys constantly on his headphones. As the needle set in the groove, we all relaxed. Talking about music helped us ease into talking about war…and healing.

Occasionally, I post a NCGA Record of the Day on my Instagram account. In these cases, I’m usually offering a commentary on the political topic of the day. Hopefully it comes across with a sense of humor. I spun the soundtrack from Shaft on the day the House of Representatives voted to legalize fracking.

Some of my favorite moments with the turntable have been in the wee hours of the morning. On nights when our debate extends into the next morning, we usually have a recess around midnight. Legislators, staff and reporters often gather outside my office to listen to a few songs on our break. We had quite a sing along to Al Green one night. On another occasion I played a feedback drenched Sonic Youth track to reflect my mood, which had the effect of driving just about everyone else away.

When it’s just me in the office, I have a few of my own favorites. While working in the mornings, I love to listen to Keith Jarrett’s classic jazz album The Koln Concert. When trying to keep my spirits up for another legislative fight, I often spin the North Carolina Music Love Army’s protest record We Are Not For Sale.

Why do I share all of this? Because one of the things that I have learned in my two years in the legislature is that it is made up of people. It’s so easy to objectify politicians and sneer at lobbyists. But sharing music has helped me see all of these people as individuals, full of stories, histories and passions. Music is one of my passions, and certainly a part of my story. So I hope this helps readers see that I’m a person too.

Besides, I’ve always found that artists do a better job of describing our political reality than actual politicians do. That is why I’m still crate digging for a copy of Public Enemy’s It Takes a Nation of Millions…

This was originally published in Graig’s monthly column in the News of Orange.
Donate Volunteer